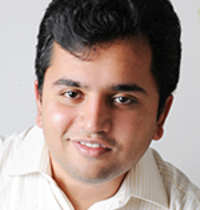 The Simons Institute is delighted to announce the appointment of Prasad Raghavendra as interim senior scientist.

Prasad is an associate professor of computer science at UC Berkeley. He and his collaborator David Steurer were the first recipients of the Michael and Sheila Held Prize from the National Academy of Sciences (2018). He is also the recipient of a Sloan Fellowship, an NSF Career Award, and the STOC Best Paper and Best Student Paper awards. He holds a PhD from the University of Washington and was a postdoc at Microsoft Research New England and an assistant professor at Georgia Tech before joining the Berkeley faculty. His research interests are in optimization, semidefinite programming, approximation algorithms, hardness of approximation and computational complexity theory.

Prasad takes over from Luca Trevisan, who served as the Simons Institute’s senior scientist from 2014 to 2019 and has accepted a permanent position at Bocconi University in Milan.

The Institute is currently searching for a second senior scientist to serve alongside Prasad.