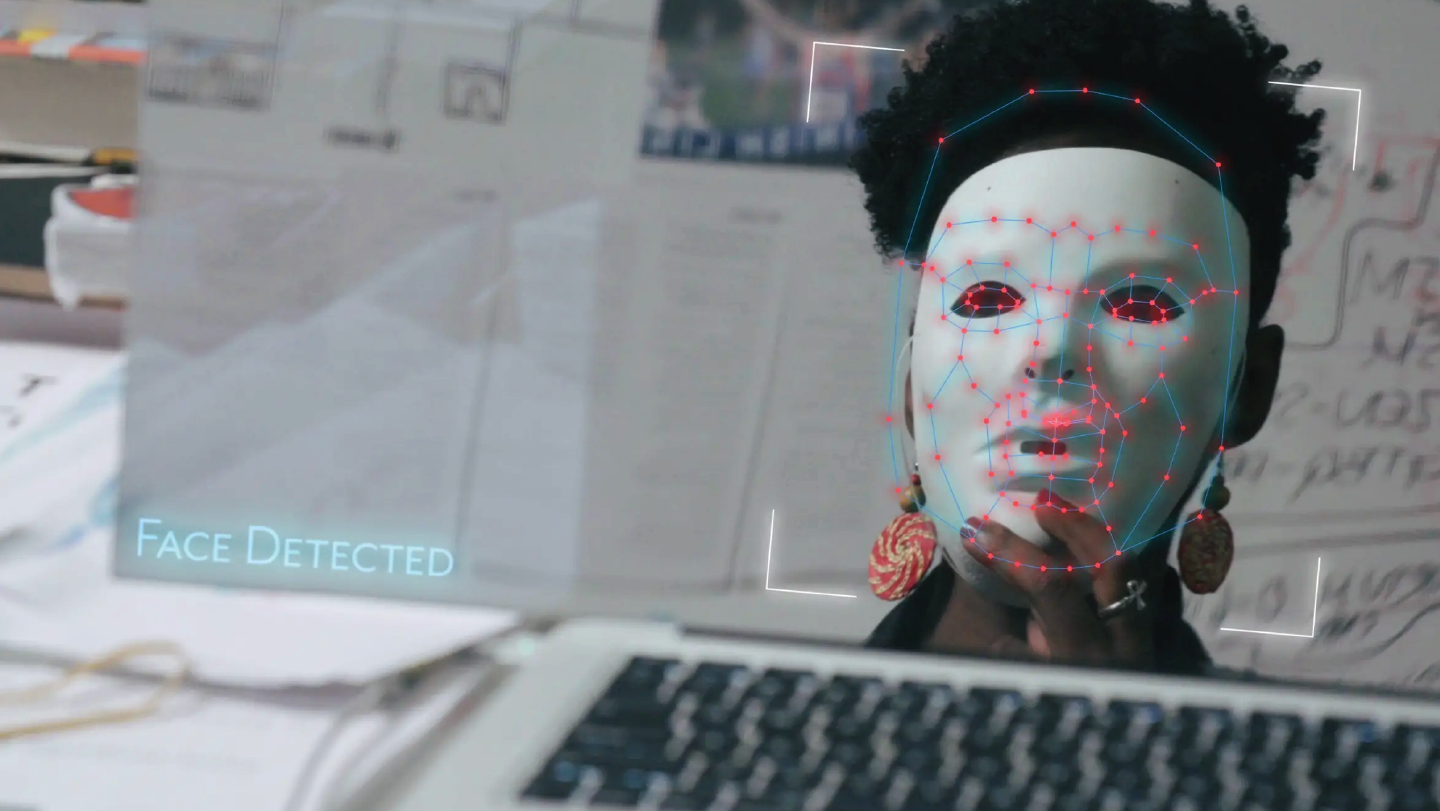 When MIT Media Lab researcher Joy Buolamwini discovers that most facial-recognition software does not accurately identify darker-skinned faces and the faces of women, she delves into an investigation of widespread bias in algorithms. The film Coded Bias follows Joy’s exploration of the impacts of machine learning algorithms, and her effort to secure federal legislation to protect civil liberties from the unregulated use of algorithms in law enforcement, hiring, and beyond.

Join us for a panel discussion on the film with the director and a variety of academics on the emerging field of algorithmic fairness.

Seny Kamara is a professor of computer science at Brown University and chief scientist at Aroki Systems. Before joining Brown, he was a researcher at Microsoft Research in Redmond. His research is in cryptography and is driven by real-world problems from privacy, security, and surveillance. Kamara has worked extensively on the design and cryptanalysis of encrypted search algorithms, which are efficient algorithms to search on end-to-end encrypted data. He maintains interests in various aspects of theory and systems, including applied and theoretical cryptography, data structures and algorithms, databases, networking, game theory, and technology policy. At Brown, Kamara co-directs the Encrypted Systems Lab and is affiliated with the CAPS group, the Data Science Initiative, the Center for Human Rights and Humanitarian Studies, and the Policy Lab. He teaches a course, Algorithms for the People, that surveys, critiques, and aspires to address the ways in which computer science and technology affect marginalized communities.

Shalini Kantayya is the director of the film Coded Bias, which premiered at the 2020 Sundance Film Festival. She directed for the National Geographic television series Breakthrough, executive-produced by Ron Howard and broadcast globally in June 2017. Her debut, Catching the Sun, premiered at the LA Film Festival and was named a New York Times Critic’s Pick. Catching the Sun released globally on Netflix on Earth Day 2016 with Executive Producer Leonardo DiCaprio and was nominated for the Environmental Media Association’s award for best documentary. Kantayya is a TED fellow, a Fulbright scholar, and an associate of the UC Berkeley Graduate School of Journalism.

Sendhil Mullainathan is the Roman Family University Professor of Computation and Behavioral Science at the University of Chicago Booth School of Business. His current research uses machine learning to understand complex problems in human behavior, social policy, and especially medicine, where computational techniques have the potential to uncover biomedical insights from large-scale health data. He currently teaches a course on artificial intelligence. In past work, he has combined insights from economics and behavioral science with causal inference tools — lab, field, and natural experiments — to study social problems such as discrimination and poverty. Paper topics include the impact of poverty on mental bandwidth, how algorithms can improve on judicial decision-making, whether CEO pay is excessive, using fictitious résumés to measure discrimination, showing that higher cigarette taxes make smokers happier, and modeling how competition affects media bias. He co-authored Scarcity: Why Having Too Little Means So Much and writes regularly for the New York Times. Additionally, his research has appeared in a variety of publications, including the Quarterly Journal of Economics, Science, American Economic Review, Psychological Science, the British Medical Journal, and Management Science. Mullainathan helped co-found a nonprofit (ideas42) to apply behavioral science, co-founded a center to promote the use of randomized control trials in development (the Abdul Latif Jameel Poverty Action Lab), serves on the board of the MacArthur Foundation, has worked in government in various roles, is affiliated with NBER and BREAD, and is a member of the American Academy of Arts and Sciences. Prior to joining Booth, Mullainathan was the Robert C. Waggoner Professor of Economics in the Faculty of Arts and Sciences at Harvard University, where he taught courses about machine learning and big data. He began his academic career at MIT. Mullainathan is a recipient of the MacArthur “genius grant,” has been designated a Young Global Leader by the World Economic Forum, was labeled a Top 100 Global Thinker by Foreign Policy magazine, and was named to the Smart List of “50 people who will change the world” by Wired magazine (UK). His hobbies include basketball, board games, googling, and fixing up classic espresso machines.

Omer Reingold is the Rajeev Motwani Professor of Computer Science at Stanford University and the director of the Simons Collaboration on the Theory of Algorithmic Fairness. Reingold has held positions at Samsung Research America, the Weizmann Institute of Science, Microsoft Research, the Institute for Advanced Study, and AT&T Labs. His research is in the foundations of computer science and most notably in computational complexity, cryptography, and the societal impact of computation. He is an ACM fellow and a Simons investigator. Among his distinctions are the 2005 Grace Murray Hopper Award and the 2009 Gödel Prize.

Patricia Williams, a pioneer of both the law-and-literature and critical race theory movements in American legal theory, is university distinguished professor of law and humanities at Northeastern University and professor emerita at Columbia Law School. She is also director of Law, Technology and Ethics Initiatives in the School of Law and the College of Social Sciences and Humanities at Northeastern. Williams has published widely in the areas of race, gender, literature, and law. Williams’s current research raises core questions of individual autonomy and identity in the context of legal and ethical debates on science and technology. Her work in the area of health and genetics, for example, questions how racial formulations are produced by the nominating powers of private industry and government. Her work on algorithms grapples with the auditing function of technology in our everyday lives — shaping how we understand who we are. Williams has authored hundreds of essays, book reviews, and articles for leading journals, popular magazines, and newspapers, including the Guardian, the Times Literary Supplement, the New York Times, the New Yorker, and the Washington Post, and writes a widely read column in The Nation. Williams has held fellowships at the School of Criticism and Theory at Dartmouth College, the Humanities Research Institute of the University of California, Irvine, the Institute for Arts and Civic Dialogue, the Center for Advanced Study in the Behavioral Sciences at Stanford, the Radcliffe Institute for Advanced Study, and the Berkman Klein Center for Internet & Society. The recipient of numerous honorary degrees, she is an elected member of the American Philosophical Society and a MacArthur “genius” fellow. Her latest book, Giving a Damn: Race, Romance and Gone With the Wind, is forthcoming from HarperCollins in June 2021.

Ashia Wilson (moderator) is a professor of electrical engineering and computer science at MIT, where she is a member of the faculty of artificial intelligence and decision-making (AI&D) and the Laboratory for Information & Decision Systems (LIDS). She obtained her PhD from UC Berkeley in statistics and her BA from Harvard University with a concentration in applied mathematics and a minor in philosophy. Before joining MIT, she held a postdoctoral position in the machine learning group at Microsoft Research New England. Her research focuses on the methodological foundations and theory of various topics in machine learning. She is interested in developing frameworks for algorithmic assessment and providing rigorous guarantees for algorithmic performance.

Theoretically Speaking is a lecture series highlighting exciting advances in theoretical computer science for a broad general audience. Events are free and open to the public. No special background is assumed. The lecture will be held via Zoom webinar. Registration is required to receive the webinar link. Please use the Q&A feature to ask questions. This lecture will be livestreamed and may be viewable thereafter on this page and on our YouTube channel.

If you require accommodation for communication, please contact our access coordinator at simonsevents [at] berkeley.edu with as much advance notice as possible.