Selfish Behaviour and Uncertainty
The author had the undeserved great fortune to be invited to two semesters at the Simons Institute for the Theory of Computing. The author had a truly wondrous time and is immensely grateful for the this fantastic opportunity. The opportunity to hear and interact with the amazing people attending was priceless. Thus, when asked to write a short Research Vignette,1 the author felt that it would be churlish to object strenuously. One can but hope that this is not yet another example of an error in judgment.2

Temporal uncertainty occurs where the future or certain aspects of the future are unknown. Decisions made today (e.g., agreeing to write this article) may have unforseen consequences tomorrow (when the disastrous NYT critique is published). Optimal stopping theory,3 prophet inequality settings,4 secretary settings,5 and competitive analysis of online algorithms6 all deal with aspects of and models for temporal uncertainty. This vast body of work includes both Bayesian and worst-case models.

Another element of uncertainty arises when selfish agents interact. Clearly, it is useful to know how much a customer is willing to pay before trying to sell her something. Given that the techniques used by Torquemada are often condemned,7 one needs to be more subtle when considering the impact of private information.

One approach is to consider rational behavior and study resulting equilibria.8 Pricing equilibria (competitive equilibria) have been studied in many settings.9 Social choice theory10 and mechanism design11 seek to engineer algorithms so as to achieve certain desired goals. A wide variety of equilibrium notions have been defined, including dominant strategy, Bayes-Nash, and many others.

The computer science outlook is to quantify things – in this case, how good an outcome arises in equilibria when compared to optimal outcomes,12 and what mechanisms can be implemented in poly time.13

The setting of interest
Consider a model of online decision-making mechanisms in which selfish agents arrive sequentially, and the mechanism decides upon an outcome and payment for each arriving agent, where payments are used to align the incentives of the agent with that of the mechanism. There is temporal uncertainty because the preferences of the agents (their types) are unknown. The agent may have an opportunity to specify her type, but the decisions made by the mechanism might not be in the best interest of the agent. This may result in the agent strategically misrepresenting her preferences so as to achieve a better outcome for herself. A mechanism is truthful if it is always in the best interest of the agent to report her type truthfully.

For some time I have been obsessed with a specific class of truthful online mechanisms that take the form of dynamic posted prices.14 The assumption here is that the future is entirely unknown, and can be determined adversarially with no guarantees on future behavior. Dynamic pricing schemes are truthful online mechanisms that post prices for every possible outcome, before the next agent arrives. Then, the agent chooses the preferred outcome — minimizing the cost for the outcome plus the price tag associated with the outcome.

We note there are many other problems where posted prices play a major role, within widely differing models, information states, and various stochastic assumptions.15

A dynamic pricing scheme is inherently truthful, since prices are determined irrespective of the type of the next agent. Posted price mechanisms have many additional advantages over arbitrary truthful online mechanisms. In particular, such mechanisms are simple: agents need not trust or understand the logic underlying the truthful mechanism, agents are not required to reveal their type, and there is no need to verify that the agents follow the decision made by the truthful online mechanism.

In a paper at EC 2017, Feldman, Roytman and I presented constant competitive dynamic pricing schemes for makespan minimization in job scheduling. Events represent jobs; the job type contains the job’s processing times on various machines. Agents seek to complete their job as soon as possible, and therefore prefer to be assigned to a machine whose load (including the new job) is minimized.16 One can consider so-called related machines (where machines have speeds, and jobs have some quantity of work to be done) and unrelated machines (where the time associated with a job arbitrarily depends on the machine). Previous online algorithms for the problem17 are not truthful — in that a job may misrepresent its size so as to get a preferential assignment to a machine.

An online truthful mechanism for this setting determines an allocation and payment for each arriving agent upon arrival. That is, upon the arrival of a job, based on the job’s processing times, the mechanism assigns the job to some machine and determines the payment the agent should make. The cost of an agent is the sum of the machine’s load (including her own processing time) and the payment. Each agent seeks to minimize her cost.

A dynamic posted price mechanism for this setting sets prices on each machine, before the next agent arrives (prices may change over time). The next agent to arrive seeks to minimize her cost, i.e., the load on the chosen machine (including her own load) plus the posted price on the machine. The agent breaks ties arbitrarily.

An example of dynamic pricing: Makespan minimization, related machines
We now motivate how dynamic pricing is useful, via a small example. We do so by comparing the schedule produced without any pricing to the schedule produced via a dynamic pricing scheme. Schedules obtained without pricing are equivalent to schedules produced by the greedy algorithm that assigns each job j to a machine i that minimizes ℓi(j − 1) + (the load on machine i prior to the arrival of job j, plus the additional time required for job j itself). 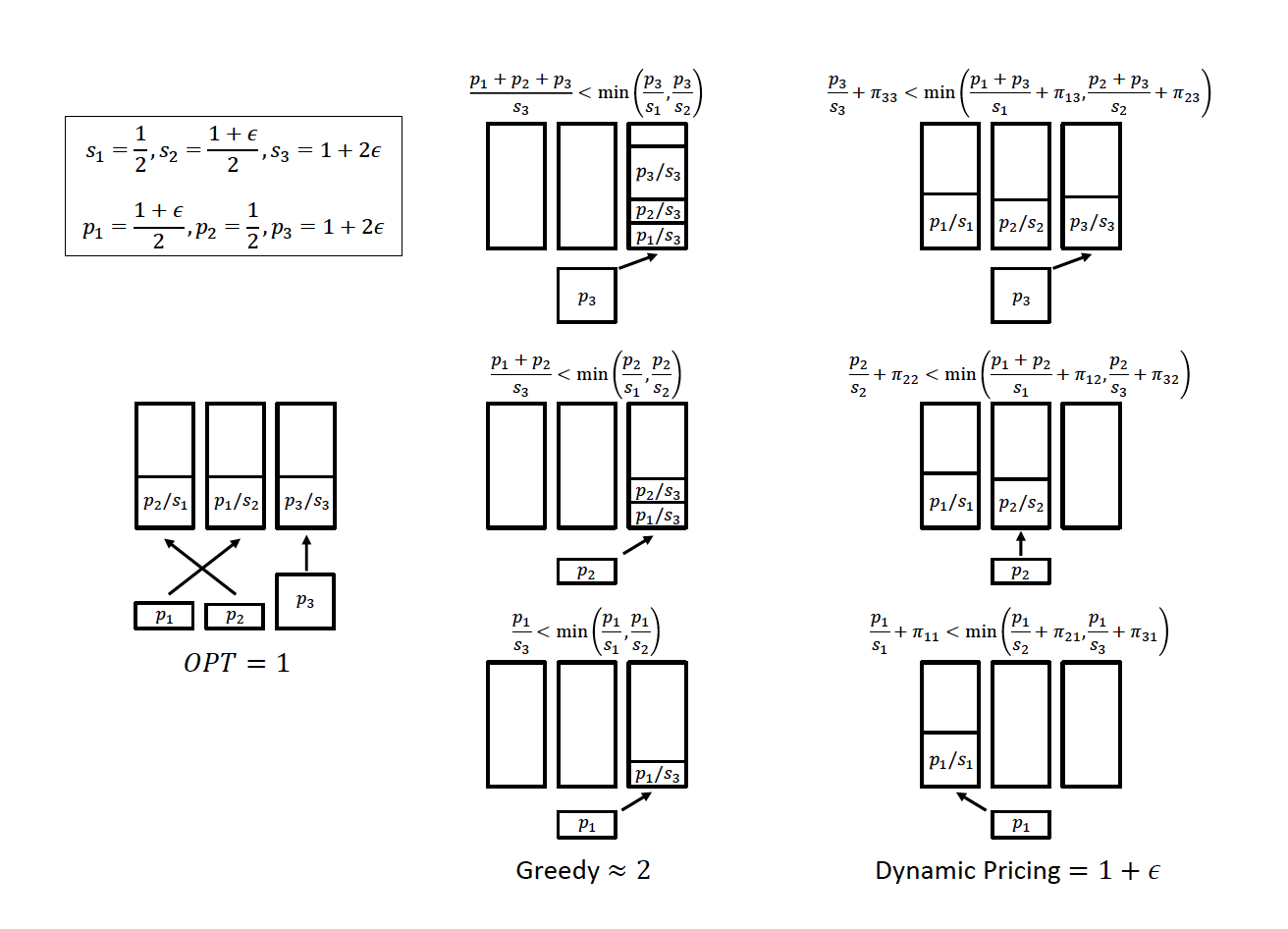 Figure 1: Related machines: the optimal makespan, the greedy algorithm, and dynamic pricing. The algorithm for setting dynamic prices is missing.

Pricing scheme: Our dynamic pricing scheme sets prices before the arrival of each job, which are independent of the type of the incoming job. We omit the explanation as to how to set these prices.18 The important aspect is that these prices are set before knowing what the next job will be. The performance guarantee must hold irrespective of the future. Let cij be the cost of job j on machine i; this is the sum of the completion time and the additional posted price currently on the machine.

During a talk in the Fall 2017 Simons Institute program on Algorithms and Uncertainty, I proposed that one study dynamic pricing schemes for flow time; and indeed, one definite outcome of this semester is a paper by Im, Moseley, Pruhs and Stein that comes up with a constant competitive dynamic pricing scheme to minimize the maximum flow time (the maximum time an agent is in the system). This improves on the previous online algorithm for the problem in terms of the competitive ratio, and has the added advantage of being truthful and simple.

Afterword
It has been a pleasure discussing these and other problems with researchers visiting the Simons Institute, and at my home site, Tel Aviv University. I am grateful for discussions with and gracious instruction from Nikhil Bansal, Avrim Blum, Alon Eden, Michal Feldman, Anupam Gupta, Ilia Gorlick, Haim Kaplan, Anna Karlin, Dick Karp, Thomas Kesselheim, Bobby Kleinberg, Elias Koutsoupias, Stefano Leonardi, Christos Papadimitriou, Kirk Pruhs, Tim Roughgarden, and Matt Weinberg. In various combinations, we have tried to attack many other online problems via dynamic pricing. Many of these are wide open; some (minor) progress has been made on others. Many an idea arose in the numerous talks and discussions at the Simons Institute.

1Merriam-Webster online dictionary: 2a) a short descriptive literary sketch; 2b) a brief incident or scene (as in a play or movie).

2According to Aristole (Poetics, 4rd century BCE), an ideal tragedy is caused by error in judgment by the protagonist, and not by unavoidable error.

16In this interpretation, "load" is the time required by the server to deal with all current jobs in the server queue, and jobs are processed in a first-in, first-out manner, i.e., jobs enter a server queue.

19Many thanks to Moshe Babaioff, Liad Blumrosen, Yannai A. Gonczarowski and Noam Nisan for discussions helpful in clarifying this point.